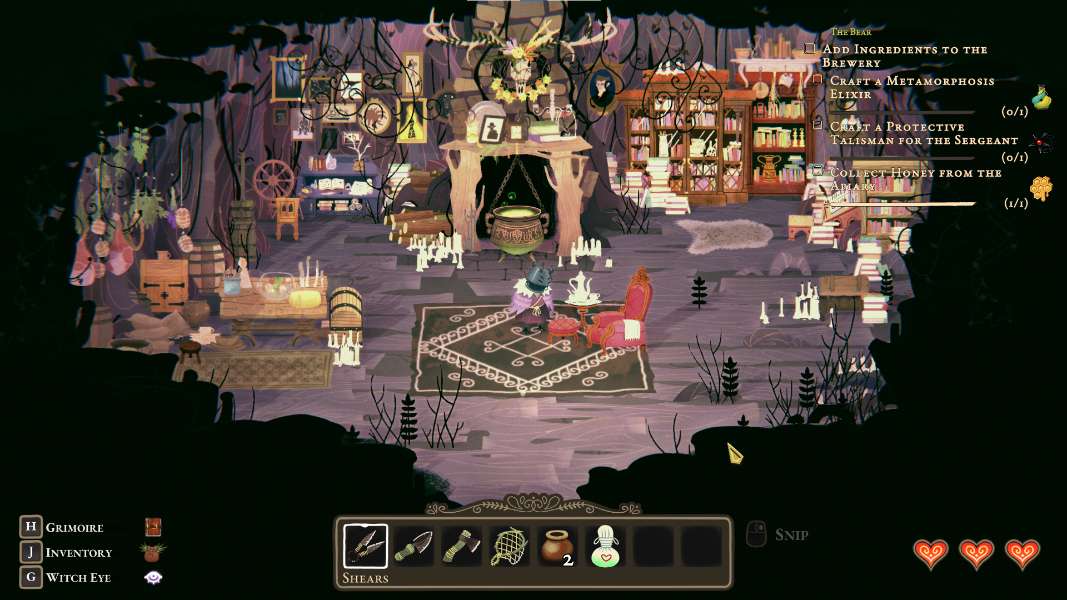 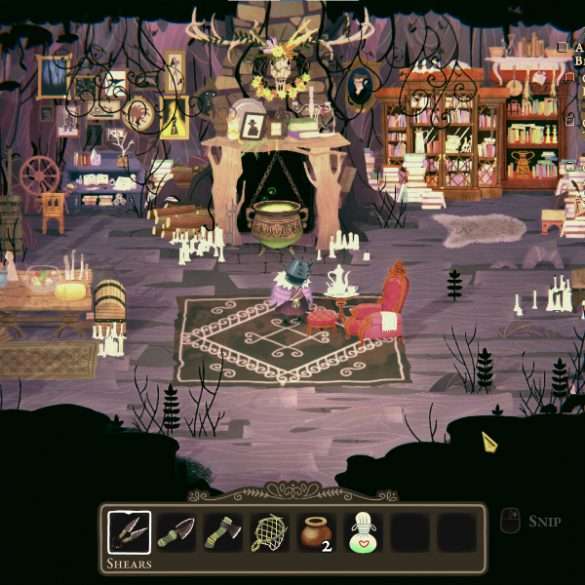 This first hour flew by  – Wytchwood is very easy to pick up and get the hang of, getting you straight into the story.

You play as the witch, funnily enough, exploring the woods, swamp, fields and more while completing quests for a goat. It makes more sense in the game than writing it out does, honest! You must collect ingredients to craft the potions and items you need for each stage of the quest.

I have been concentrating on just one at the moment, and it’s taken me to several regions of the game, completing a number of sub-quests before you achieve one of the 12 goals set by the goat. If you like to work on more than one thing at a time there is a handy journal and tracker system to switch between active quests, but I thought I would keep things simple to start with.

The quest tracker does make the game feel very open – you can largely choose what order to complete the tasks in, and dip and out as you like.

As you can see from the Grimoire screenshot (your recipe page) there are many possible spells and items you will be crafting, a lot of them made up of several reagents and ingredients themselves. I imagine the production line for some items is going to be very long, and you would do well to start picking up anything and everything as soon as you see it.

Wytchwood’s crafting is very straightforward: it can be done straight from this menu without having to return to your cottage or go to a particular area, and it will link you straight into the recipe for any other items you need first. This is a great frustration saver.

Another thoughtful touch is the highlighting of dropped items when you harvest a plant or chop up an old trunk. Sometimes they can drop behind the scenery, but because you see can see the highlight when you mouse close enough, whether it’s in the foreground or background, you never lose a valuable resource.

The artstyle for Wytchwood is interesting, 2D paper-like affect, but it still has movement and interest, and the sound of your footsteps running through the forest is really quite satisfying. I was also nicely surprised at the direction the storyline is taking: the developer Alientrap have done a good job in catching my interest, and creating a solid reason for the main game mechanic of resource collection and crafting.

One of the first things I went to in the setting though, was to turn off the camera sway. The settings are easy to find to get rid of it, but I’m not sure it adds that much to the game to have it on anyway. That could just be my tendency towards sim sickness speaking though.

Overall I’ve enjoyed The First Hour, and will be going back. In fact it’s one of those games that is hard to stop, as there’s always ‘just one more thing’ to do. I think I will be spending many more hours wandering around the Wytchwood.