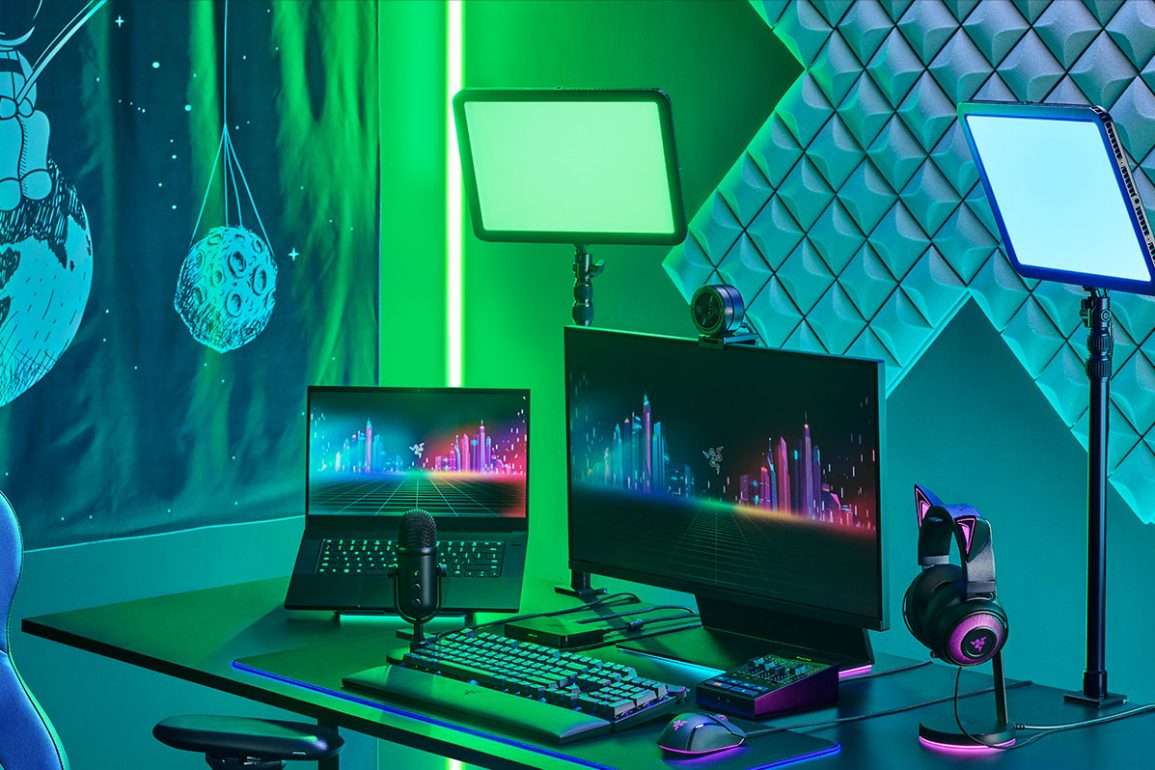 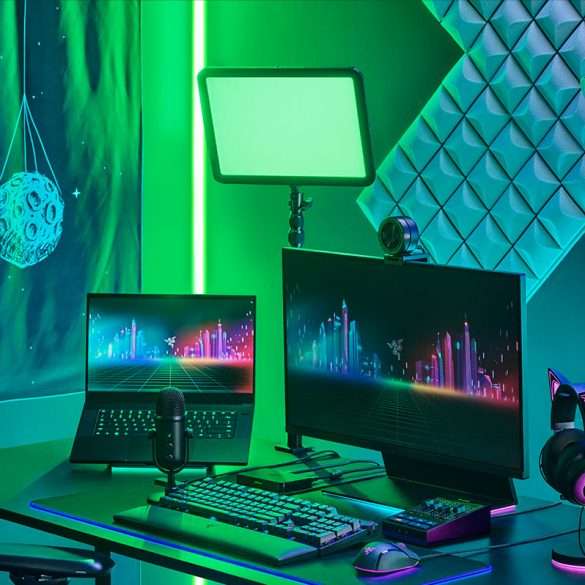 The Audio Mixer and Key Light Chroma are aimed at desktop streamers and the wireless Seiren BT microphone is specially designed for smartphone streamers for IRL (In Real Life) mobile streaming as a competitor to existing solutions like the the Rode Wireless Go II.

We’ve already ordered two of the Razer™ Key Light Chroma and one each of the Razer™ Seiren BT microphone and Razer™ Audio Mixer as a consumer through the Razer UK website and we’ll let you know as soon as they arrive ready for review but for now we’ve got some more information from todays press release.

Razer™ describe the Razer™ Key Light Chroma as an all-in-one accessory for professional studio lighting with any setup powered by Razer™ Chroma RGB, giving users access to over 16.8 million colours and countless lighting effects to secure your own signature colour. As with other streamer focused lighting the Key Light Chroma can automatically react to your stream supported by Razer Synapse and Razer Streaming Mobile App, allowing you to control the lights via your PC or phone and it comes with an adjustable desk clamp mount and extendable pole with a range of 45cm to 130cm in height. Razer say you can sync up to eleven devices via Razer Synapse and the Razer Streaming App.

In addition to Razer’s traditional RGB colour options you can use set the Key Light Chroma as a traditional video light with a 3000K – 7000K according to Razer’s lighting specification in so you can achieve a warm, balanced of cool white tone depending on the aesthetic you’re looking for and your subject. The light brightness is also adjustable from 0-100% with a maximum brightness of 2,800 lumens.

It seems that you will have more control over more functions through the Razer Synapse app, including Chroma Studio and the lights interactive features, with the Razer Streaming App (their mobile app) providing only control for essential features. You can connect to your Key Light either via Wi-Fi (2.4 Ghz) or Bluetooth.

Now for the part you’ve been waiting for, the price, the Razer Key Light Chroma has an MRSP of £299.99 / 299,99€/ $299.99 USD which is a lot for a streamer focused light when compared to the already premium priced Elgato Key Light at £189.99, so you are paying quite the premium for RGB, I suppose it is Razer after all.

The second streamer focused release from Razer is their new Razer Audio Mixer, a single-box solution made for streaming, with a range of direct inputs and a centralized, powerful audio mixing software stack, bringing what Razer claim to be new levels of control and live mixing to desktop streamers. Razer say this level of control traditionally requires a complex, cumbersome and expensive multi-device set-up – but the Razer Audio Mixer brings everything into one easy-to-use, simple to set up, fully customizable 4 channel analogue mixer. This appears to be a direct competitor to TCHelicons GoXLR and GoXLR Mini or BEACN’s Mix Create.

Razer say their Audio Mixer allows streamers to control multiple audio sources on-the-fly, balancing the volume levels between sources, muting channels as needed and even adding vocal effects to enhance their streams. This level of control is simple and easy to set-up, making it accessible to every streamer regardless of technical expertise, thanks to the direct input support for the most commonly used audio connections, including hybrid-XLR (with 48V Phantom Power), TRS Line In and Out and Optical TOS.

The Razer Audio Mixer software is a centralized audio mixing software suite, that Razer have fully integrated into Synapse 3 and supports all digital audio output sources, including game sound, system, chat, and music sources. Through Razer Synapse 3, users can access a range of audio adjustment options, from software-based noise gate and EQ functions through to reverb and voice changers. Each audio source can be balanced, mixed and mapped to the hardware functions on the Audio Mixer, with the audio settings and processing offloaded to the Audio Mixers onboard processor, freeing up system resources on the PC.

Razer say their Audio Mixer is designed to take the hassle out of professional quality streaming audio, simplifying the set-up with direct inputs by giving users full control over their audio sources, channel mixes, effects and microphone settings. By supporting both analogue and digital sound sources, with source tuning, per channel mixing and live fading, muting and effects, Razer want streamers to see this as a one-box solution to their audio needs.

The Razer Audio Mixer has an MRSP of £249.99 / $249.99 USD / 259,99€. For context the GoXLR Mini is currently selling for £133.00 on Amazon and it’s full size cousin the GoXLR is retailing for £315.00. All of these are expensive additional options for audio but we’re really interested to get our hands on the Razer Audio Mixer and see what it’s actually like to use.

The third of Razer’s new streamer focused releases is the Razer™ Seiren BT a wireless microphone that uses a simple clip on design and a Bluetooth connection to users phone to allow IRL streamers to improve their stream audio on the go without using wired microphones. Razer boast the Razer™ Seiren BT delivers rich, warm voice tones, via the omnidirectional microphone and features powerful noise suppression software controlled via the accompanying Razer Streaming Mobile App.

“Until now, IRL streamers have needed to use a wired microphone to deliver clear audio to their viewers, limiting how much they can move around or change the view from their mobile, especially in noisy outdoor environments,” said Richard Hashim, Head of Razer’s Mobile & Console Division. “Now, with the Seiren BT, IRL streamers have complete freedom of movement, holding their mobile wherever they want to capture the shot, without cables getting in the way, to give their viewers a rich, engaging experience with even, balanced audio levels.”

The Seiren BT is the latest addition of what Razer’s refer to as their professional grade microphone products, which includes the Seiren V2 Pro, Seiren V2 X and Seiren Mini.

The Razer Audio Mixer has an MRSP of £99.99 / $99.99 USD / 109,99€. For context the RØDE Wireless Go II, which is more feature rich and supports two mic packs rather than one is currently selling for £235.00. It’s going to be really interesting to see how the mic performs compared to the alternatives when it arrives and we’ll be letting you know as soon as we have our hands on the new gear.

So what do you think of Razer’s further push into streaming audio and lighting, though very much on the premium end they seem to be focusing on head to head alternatives to Corsair owned Elgato products at every turn. Let us know your thoughts over in the Community Discord.