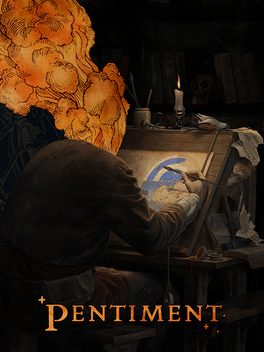 Pentiment – Is It Worth It? (Spoiler-Free)

Home
Reviews
Game Reviews
Pentiment – Is It Worth It? (Spoiler-Free)
9.5
XboxSteam

Pen • ti • ment
a reappearance in a painting of an original drawn or painted element which was painted over by the artist.

What is Pentiment about?

In Pentiment, you play as Andreas Maler, a master artist who has been tasked with the illustration of a book in the Kiersau Abbey in early 16th century Bavaria. Andreas resides with farmers in the village of Tassing during the time he needs to complete his work – this allows him to get to know the inhabitants of Tassing, make friends and potentially enemies.
As stories unfold in Tassing and Kiersau, Andreas is being tasked with solving the murder of a nobleman to save his friend. Unfortunately, time is of the essence and there is not much time to gather clues and come to a conclusion.

Pentiment is beautifully stylised, combining the art style of medieval manuscripts with more modern approaches to art fuelled by the invention of the printing press. The early 16th century is a time of changes and challenges and the game reflects this really well.

Pentiment is a point-and-click adventure you can play entirely with your mouse. The controls are thus very straightforward, you can click on the ground to move Andreas around or click on objects with a marker to investigate objects or talk to people.

There are occasions during which you can customise what Andreas knows and thinks, which in turn changes the dialogue options you can use during your playthrough.

(You will see that my screenshots are all in German – I wanted to play the game in the language spoken in the area of the world this is placed in. You are free to choose any of the other available languages (English, French, Italian, German, Spanish, Polish, Portuguese) though!)

To aid you on your journey, you can always view Andreas’ journal, where he keeps track of his persona, quests, a map, people you met, and a glossary.

You can fill the glossary by clicking on words underlined in red during dialogues, which brings you to a zoomed-out view where annotations on the side explain what the term means. Note the hand with the long finger, which is typical for book annotations at the time.

Pentiment offers a main storyline, woven through three acts, which allows the player to work on Andreas’ masterpiece, investigate the murder, shape the story of Tassing and ultimately uncover the biggest secret the town holds.

In addition to the main storyline, you can find side quests which you can complete along the way. The side quests might not be mandatory to advance in the storyline but they might help you find out more about Tassing and the people living there.

You will meet characters again at different stages in their life, people will marry, give birth to children and die. Andreas will also change alongside them, he will gain and lose people very dear to him. This is a really successful way of telling the stories of not just one man but a whole village. I grew to love the characters in Tassing and they feel real and like they could have existed.

The art of Pentiment is beautiful. The game looks like it has been drawn by hand and the style is very consistent throughout. The part that felt truly innovative were the speech bubbles.

Characters do not talk through a standardised font but their handwriting appears over their head as if they were writing it down for us. We can hear the faint scratching of the writing tool on paper and watch as the ink is being applied to the paper and dries. Coloured ink is being added if the characters want to stress the importance of a word and you can watch the ink spill when they are upset. I truly love the attention to detail here and did not miss the addition of voice acting at all.

If you have trouble reading the fonts in the game, you can head over to the settings and change them to a more legible font.

The sound design blends in really well with the environment. The soundtrack is subtle but moving and the sounds generated by the environment (walking, rain, machines) are beautiful and well-picked. I found myself just standing in the church of Kiersau Abbey, listening to the rain on the big glass windows and the singing of the monks, because I enjoyed the sound design so much.

Can you pet the dog?

Yes. The cat too!

Pentiment
So is it worth it?
Yes! If you are into carefully designed story-rich games, Pentiment will be absolutely delightful to play. It might not be the game for you if you are more into action-packed games and don't like exploring and uncovering stories piece by piece. See below for a full, more detailed review.
Visual Design
Sound Design
Story
Immersive
Educational
Long Exploration Parts (if you want to 100% the game)
9.5
XboxSteam