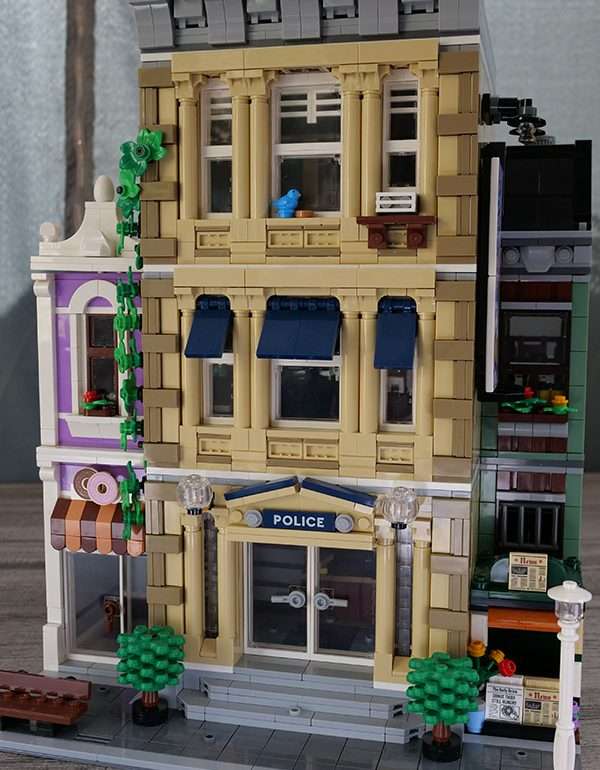 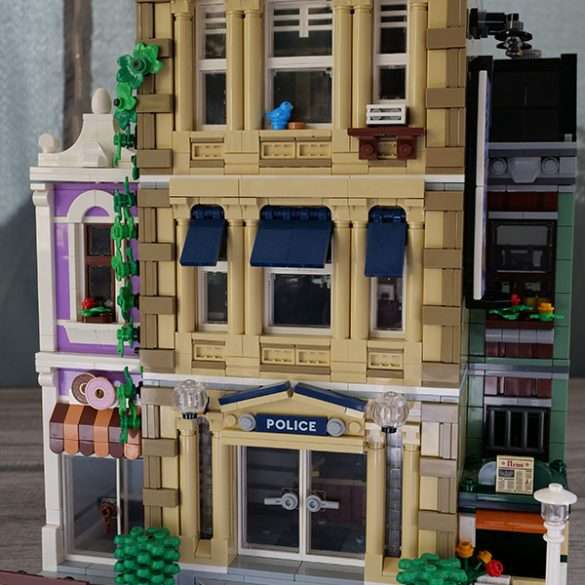 This is a long awaited set in the Flanker- Plan household. Since we first ventured into the Modular City sets, a large police station is something we’ve been missing. There are many police vehicles, and a few smaller stations, but nothing in the distinctive Modular style. We wanted a place for all our police minfigs to hang out so much that we modded the Brick Bank (10251) into a police station, as we thought an official set would never come.

As with most in the range, the base is one 32 by 32 piece with the station itself sitting between two smaller buildings. We really like when these sets mix up the architecture, and here we have three distinct styles. The police station also sits forward of the two other buildings, which adds a lot of interest compared to it being a flat front.

The star of the show is of course the police station – three floors featuring entrance, jail cell, interview rooms, evidence room and office space. We felt that there could have been a bit more interest on the internal and external walls (we were fresh off the treat that is the Medieval Blacksmith, 21325, so may have been a bit spoiled) but there are some great details like the recording equipment and conspiracy board.

A frequent question while we were building: why do the walls not go all the way up, so a minifig can peek over the top between buildings and into the ahem private areas? We don’t know, so if you find out please tell us. Our favorite aspect has to be the tunnel in the jail cell – confusing to build when you’re not looking ahead in the instructions but brilliantly done.

Next door to the station is the donut shop – a very valued addition to any city. The shelves at the back were a little tricky to position correctly, but we got there in the end. We are also fond of the newspaper stand on the other side, which is a small and flexible enough build that you could easily make a few more to drop into other areas of a city set up.

Another nice addition is the fine creeping all the way up the building – you could stack more leaves on it or even add flowers if you wanted to change how it feels. Our list of interesting pieces include some wedge shapes from the tunnel at the bottom, and what we now know to be Minecraft head pieces in the roof. There’s also a very interesting bit of work for the Police Station sign, and to make the two angled pieces that frame it.

With a build time of around four and a half hours this is a full afternoon build (please remember we have three people building, so it tends to go a little quicker than you might expect) and a very satisfying one.