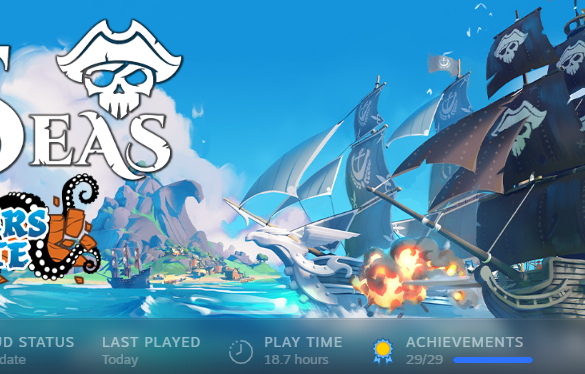 King of Seas is a Pirate combat game with RPG elements. It has a focus on pure Ship to Ship combat with some Ship to Building combat, but it is doing so not just with cannonballs and looting hooks whittling down the health of the enemy ships, but also with various kinds of abilities; such as being able to throw explosive barrels in the water or to become the flying Dutchman yourself by entering the ethereal realm and becoming completely invincible for a limited time.

DISCLAIMER: this run and therefore my experience is solely based on the highest difficulty of the game so your mileage my vary wildly.

You start out with a ship of the smallest size and no abilities at all, which are only obtainable by either killing enemies and obtaining them at random, finding them as random items on the shore and sometimes from the infinite amount of side quests that are available in the Ports of the two friendly factions – the Pirates and the Merchants – but since you’re a Pirate you obviously still attack the Merchants as you please.

Since I played this game on the highest difficulty, even though I’ve read on the forum that this is also the case in the lower difficulty to a lesser degree, you’re more squishy than one of those wobbely fluffy cakes you find on YouTube and wish you could devour. So in the end your Abilities are key and should be used as much as possible. Personally I found the Ethereal ability and the Explosive Barrel ability most useful; they help a lot in not getting hit and then you can just run away dropping Explosive Barrels behind you.

In the end I think it’s really fun and it’s absolutely possible to focus on cannonball combat but it does require certain setups like with any RPG’s where one would want to focus on specific abilities. There is also useful stuff like extra cannonball damage, range and ship turning speed.

I think this is a fun game but it’s not innovative in a lot of ways. I do enjoy the Abilities and focused on them, but that could be a result of me going for the highest difficulty straight off the bat instead of trying a lower difficulty first.

As always here are some similar games I’ve already played and I think are quite good. Here I won’t differentiate between game solely based on ship to ship combat but rather just some games I enjoyed that at least contained ship to ship content.

Are You The Next Roadwarden?

As long as you don’t want to hunt the achievements, I think a hard difficulty would probably be a good way to play this game instead of the hardest difficulty. This will very likely make the game more enjoyable as a whole experience because it doesn’t lock you into certain strategies.

Take a good look at the Talent tree first, specifically there is a Talent node that increases Experience gain and like any other RPG where you can get more exp perks this is the absolute strongest to progress faster.

The other bit is, the bigger boats are not necessarily the better boats, especially the slow moving ones. With enemies dealing so much damage that it’s very important to not get hit by a full load; I would advise maybe build a smaller upgrade ship first and then build the biggest ships last just for a try out.

With all of that being said, if I was being asked how much I actually would pay for this game with the amount of fun I had with it… I think 15 Euros would be a good price.

A Buy
I think this is a game that you should buy, maybe not the best game or the most innovative but it get's the job done for the pirate ship to ship combat i enjoy.
Reader Rating0 Votes
0
8.1