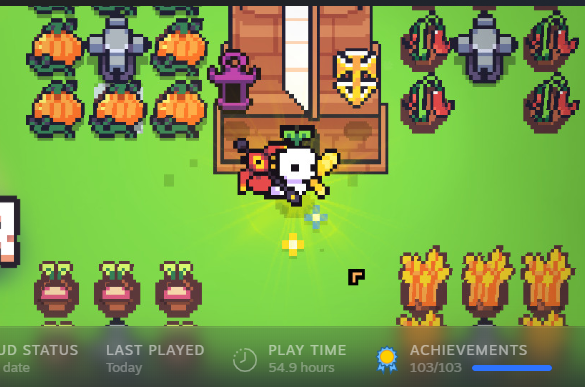 Today we’re gonna talk about a older game, that is Forager.

Forager is a Survival crafting game with combat elements. In it’s theory the game wants you to collect materials to build new buildings in which you can use the collected materials to make new materials in which you build a new building and so forth. Some of that is a bit easier to just gain by abusing money, so this is basically just like the real world.

And speaking of Money, as you start out on a small single island you have to expand. This expansion is done through earning Money by selling the Materials you got or just having Banks generate Money for you.

Other than the building new Materials and Buildings this game also relies on RPG and puzzle elements for variety. The puzzles are on the simple side but sometimes force you to use your brain in a game that is otherwise quite head emptying, and honestly I think this is an upside.

This game is chill: I don’t think the developer HopFrog designed this to be anything other than a chill game that anyone can enjoy, this is perfect for just playing something while watching a show or a stream or just have a child play it as you can easily expect kids to play most of the game without trouble.

At the end of the day the Goal of the game is to upgrade all the tools, solve all the puzzles, get all the chests and get as high as possible in the Void Realm. And the Void Realm is probably the only hard achievement to get if you’re not gonna abuse some mechanics.

The game has a “Feats” system that tells you your goals: you have to go to Stage 30 in the Void Realm and get enough legendary gems out of it to make enough Nuclear reactors for another Feat. This is probably the hardest part of the game – or the most labour intensive – as there is a very specific way to reach a high Stage in the Void Realm and it takes some time to do. But honestly as long as you’re willing to give this game about 25 hours it is possible to 100% it quite easily.

The game runs fine and is indeed finished with most initial bugs fixed….. My biggest contention point is the controls: the controls with keyboard and mouse just don’t feel that good and the controller has a whole different set of issues. Selecting specific tiles with the controller is super hard to do. This makes it diffcult to, for example, put landfill exactly where you want it.

In the end if you have to select a specific tile, and you’re using a contoller, I’d recommend you unplug the controller, do it with the mouse and then plug the controller back in. Slightly annoying but not game breaking honestly.

This game was planned to have multiplayer but in the end the developer actually came clean that after trying to implement proper multiplayer he just simply failed. He couldn’t make a good working multiplayer so he did the responsible thing of not releasing it at all and honestly I prefer it this way instead of having the taint of terrible multiplayer sticking to this otherwise fun and wholesome game.

On a side note the developer offered a refund to anyone who specifically brought the game with the expectation of getting a multiplayer sooooo good guy him.

Honestly, I’ve played it twice now, it’s quite fun and a super chill game, just don’t buy it if you’re looking for a game that’s super complex or anything of that sort. With the age of the game it can now be brought on sale for as low as 8 Euros (£5.99 / $7.99 ) so that’s an absolute ‘try it out’ for me.

That being said since Forager is on PC, Switch, PS4 and Mobile there are plenty of options! (It’s quite cheap on Mobile as well.)

As always here are some similarish games I played and you might also enjoy if you enjoy Forager: